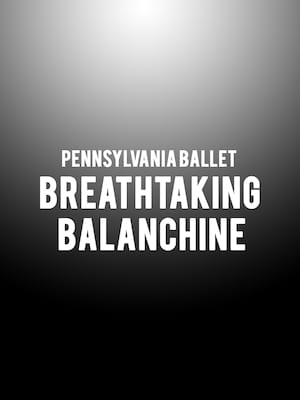 What a crowd pleaser! For ballet lovers, it's a joy, and even for those not usually fans, it would be the perfect introduction.

Celebrating The Genius Of Balanchine

The Pennsylvania Ballet brings its 2019/20 season to a rousing close with a hotly anticipated all-Balanchine program. The evening begins with Ballet Imperial, the 1941 piece originally commissioned for a US goodwill tour of Latin America. A lush tutu ballet, it is a contemporary tribute to fellow balletmaster Marius Petipa and Tchaikovsky, one of Balanchine's prime musical influences.

This is followed by the jazz-tinged Who Cares? an energetic ensemble piece built around George Gershwin's radiant melodies. Its syncopated dances and romantic duets serve as a tribute to the Tin Pan Alley icon, as well as an evocation of the exuberance of New York City's streets. The program comes to a close with Symphony in C, a dazzling neoclassical ballet set to the music of Georges Bizet. Its virtuosic displays are made all the breathtaking thanks to their lightning-fast speed, calling to mind the golden age of ballet with a hint of Hollywood glamour.

Sound good to you? Share this page on social media and let your friends know about Pennsylvania Ballet - Breathtaking Balanchine at Academy of Music.