Schitt's Creek is also touring to: 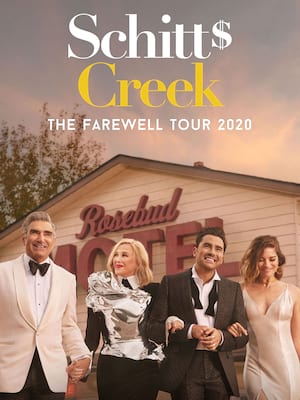 See the stars of Schitt's Creek in this farewell tour!

With the sixth and final season now upon us, it's nearly time to say our final goodbyes to Schitt's Creek. But, there's a silver lining to every grey cloud, as you'll get that chance to be up close and personal with the creators of hit comedy Schitt's Creek as this special farewell live event sees Eugene Levy, his son Daniel, Catherine O'Hara, Annie Murphy, Emily Hampshire, and Noah Reid take to the stage to discuss the hilarious and heartfelt moments from the series.

Hilarious, heartfelt and heavily bingeable, CBC's Schitt's Creek is a single-camera comedy that follows the fortunes (or misfortunes) of a once-wealthy family whose financial woes lead them to living in a motel in the tiny town of Schitt. Led by Levy Snr as patriarch Johnny Rose, Levy Jnr as David, his fish-out-of-water son, Emmy nominee Catherine O'Hara as Moira, his batty actress wife and Annie Murphy as his ditzy daughter Alexis, the Levys have created one of the finest and funniest TV families of recent times. See what insights they have into the show in this not to be missed live evening.

I have not seen a crowd go this wild at the opening of a show....maybe... more

Sound good to you? Share this page on social media and let your friends know about Schitt's Creek at Caesars Atlantic City.