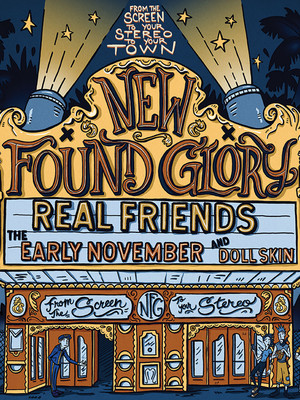 New Found Glory head out on their From The Screen To Your Stereo To Your Town tour!

From The Screen To Your Stereo To Your Town tour!

Hailing from Coral Springs, Florida, punk-pop band New Found Glory were formed in mid-1997 by vocalist Jordan Pundik, bassist Ian Grushka, drummer Joe Moreno (replaced by longtime drummer Cyrus Bolooki after the band's first release), and guitarists Chad Gilbert (previously the vocalist for Shai Hulud) and Steve Klein. Catch them live on the road this summer as they take to the road with Simple Plan!

Emerging during the second wave of Pop Punk, New Found Glory have been heralded as the godfathers of the genre, creating the blueprint for mega-bands such as Blink 182. With nine albums under their belt, New Found Glory will not lack for hits that will leave head banging and dancing all night.

Emerging at the tail end of the 90s pop-punk boom that was led by Sum 41 and Blink 182, the Canadian Simple Plan have racked up a whole catalog of catchy pop-punk moments, with just a hint of emo thrown in there for good measure. Led by Pierre Bouvier, they never deliver less than 100% on stage.

Sound good to you? Share this page on social media and let your friends know about New Found Glory at The Fillmore.