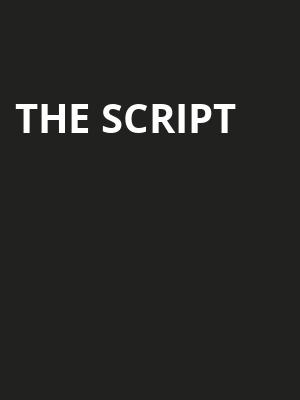 It's been a rags to riches glory ride, an emotional rollercoaster, an all action, all-star blockbuster...

Why See The Script?

tales from the script

Irish alternative rock band The Script have seen a meteoric rise to worldwide fame since bursting on the scene with their eponymous album in 2008. A blend of melancholic pop and indie rock tunes makes up the majority of their material, a lot of which can be heard on various tv shows including Ghost Whisperer, The Vampire Diaries, and The Hills. Their most recognisable song to date, "The Man Who Can't Be Moved" was used during the opening segment of The Victoria's Secret Fashion Show in 2009, as well as for Heidi Klum's Enchanted Forest piece.

While frontman Danny O'Donaghue has spent time outside the band as a coach on the UK version of The Voice, he has since returned to concentrate his efforts with the band, and in 2014 released their album "No Sound Without Silence" via Google webchat that was simulcast across the world. Now the trio are launching something of comeback with this extensive new tour, in support of new record - Tales From The Script: Greatest Hits!

Photo by Jo Jo on Unsplash

Sound good to you? Share this page on social media and let your friends know about The Script at The Fillmore.