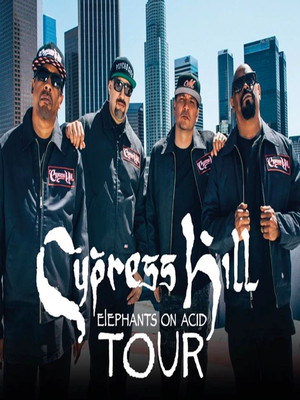 Saturday's concert was billed as a celebration of Cypress Hill's 20th anniversary, and in their vigorous renditions of early songs such as "Insane in the Brain" and "How I Could Just Kill a Man," the group demonstrated that two decades of rapacious weed

Celebrating The Release of Their Latest Album

Hip hop legends Cypress Hill will go on tour just after the release of their ninth album Elephants on Acid. The band have been cemented in music's history ever since they first hit the scene in 1988 and became the first ever Latino American hip-hop recording group to go platinum.

The group have sold over 20 million copies worldwide across their nine album career and have been nominated for three Grammy Awards. Their self-titled debut album released in 1991 performed outstandingly and sold over 2 million copies. The groups second album Black Sunday went triple platinum and included their super hit song 'Insane in the Brain.' This tour marks the release of their latest album Elephants on Acid.

Sound good to you? Share this page on social media and let your friends know about Cypress Hill at Franklin Music Hall.