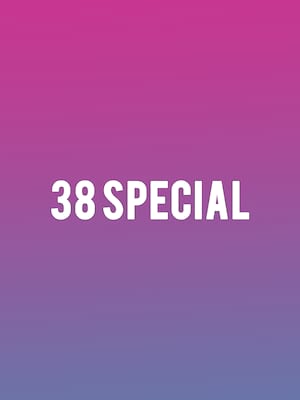 Lead by Donnie Van Zant, the brother of Lynyrd Skynyrd frontman Ronnie Van Zant, 38 Special broke out from the shadows of the Southern rock behemoth and carved out a name for themselves with soaring, stomping stadium rock and roll. Don't miss the Second Chance hitmakers when they dust off their catalog of hell-raising anthems and hit the road during an extensive tour of North America.

Formed in Jacksonville, Florida in 1974 by singer Van Zant and his childhood friend, guitarist Don Barnes, the band found its iconic name after getting stuck in a warehouse in which they were practicing rather loudly. When the cops were called and they couldn't open the door, one of the policemen shot off the lock with his .38 special. From these auspicious beginnings, an evolving collective of band members circled around Van Zant's melodic, driving sonic vision, bolstered by a committed touring schedule which still sees hundreds of shows each year.

Sound good to you? Share this page on social media and let your friends know about 38 Special at Penns Peak.