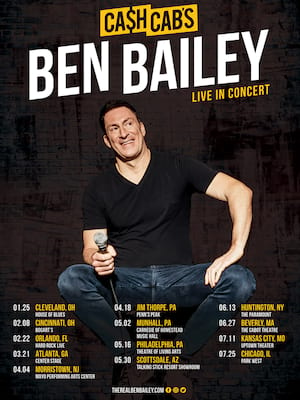 This well-polished American comic is not seen on British shores all that often - which is our loss, as he's a maestro of comic timing and a master of the joke-writer's craft.

Best known as the face off the Emmy Award-winning Cash Cab, Ben Bailey was a comedian before ever getting behind the wheel. Leaving his home town in New Jersey for the bright lights of Los Angeles to pursue a career in showbiz in 1993 and it wasn't long before he found himself onstage at the Sunset Strip's Comedy Store. Almost three decades later, Ben found his niche as a licensed taxi cab driver and game show host, but continues to bring the laughs on tours across North America.

On stage, the funnyman has cultivated a reputation as a maestro of comic timing and laugh-smith of satisfying jokes. Not content to stick to the typical build-up, punchline and tagline structure, Bailey delights in taking his time, dropping subtle lines on top of each other with hilarious results. Straightforward observations become a brilliantly interwoven tales that ultimately demonstrates the artful power of storytelling and the stand-up's greatest weapon - the pause.

Sound good to you? Share this page on social media and let your friends know about Ben Bailey at Penns Peak.