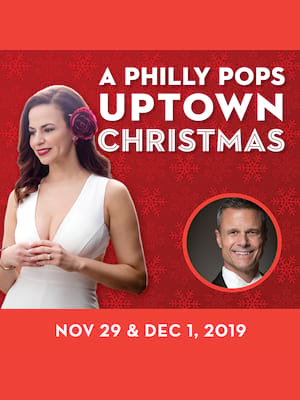 Swing into the holidays with a brand new festive concert spectacular from the Philly Pops. Well known for their ebullient holiday shows, filled with musical cheer and sing-along moments, Principal Guest Conductor David Charles Abell and the Pops are adding fresh magic to the mix by inviting Broadway stars Tituss Burgess (Unbreakable Kimmy Schmidt, Jersey Boys, Guys and Dolls) and Mandy Gonzalez (In The Heights, The Wizard of Oz, Hamilton), as well as perennial favorites The African Episcopal Church of St. Thomas Gospel Choir.

Singing updated arrangements of Christmas classics and time-honored carols, the ensemble will take the stage together for two special nights only in what will be the highlight of the Pops' holiday calendar. Perhaps best known as the cult character Titus Andromedon in Tina Fey's Netflix Hit The Unbreakable Kimmy Schmidt, four-time Prime Time Emmy nominee Burgess not only brings an impressive high tenor to the stage, but imbues his performances with a sense of charisma, attitude, wit and sassiness that is simply not to be missed.

Sound good to you? Share this page on social media and let your friends know about Philly POPS Presents Uptown Christmas at The Met Philadelphia.