Sorry! You missed The Life Story of Mahalia Jackson at The Met Philadelphia 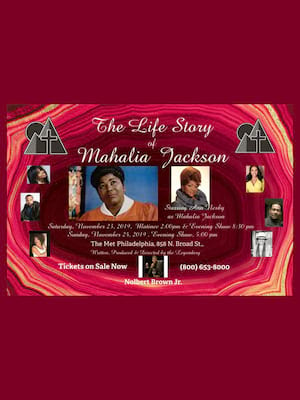 The Life Story of Mahalia Jackson

In the 1940s and '50s, Jackson was the most famous gospel singer in the world.

Why See The Life Story of Mahalia Jackson?

The Story Of Mahalia Jackson Told Through Her Own Music

Long hailed as the Queen of Gospel Music, Mahalia Jackson brought jazz to the Church during her prolific four decade career. Possessing a powerful contralto voice, the iconic songstress rose from a childhood of abject poverty to become one of the most powerful African American women in music, a story filled with trials, tribulations and triumphs. Told through her own music, that fascinating story comes to life during The Life Story of Mahalia Jackson at the Met Philadelphia this November.

Starring fellow R&B and gospel diva Ann Nesby in the titular role, the production is lead by Tony Award-winning writer, director, producer and playwright Nolbert Brown Jr. From her early life in New Orleans to celebrated performances on stages the world over and collaborations with the likes of Louis Armstrong, it traces her path to greatness with stunning arrangements of career-defining hits Just As I Am, How I Got Over, Trouble of the World and more!

Sound good to you? Share this page on social media and let your friends know about The Life Story of Mahalia Jackson at The Met Philadelphia.