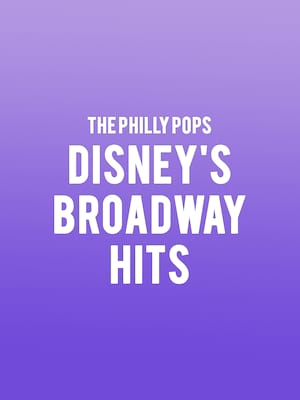 For over two decades, the music of Disney has redefined the Broadway Musical

Experience The Music Of Disney With the Philly Pops

The bright lights of Times Square and New York's Theatre District shine all the brighter thanks to the long reign of blockbuster Disney musicals on Broadway. From the jaw-dropping puppetry spectacle of The Lion King to the myth and magic of Aladdin, these big-budget, family-friendly spectaculars all share incredible scores and memorable songs which bring these time-honored stories to life with dazzling dancing, sumptuous costumes and sweeping set designs.

Join the Philly Pops for a rousing performance of Disney's greatest show tunes, celebrating the 20th Anniversary of Disney on Broadway. For two special nights only, the ensemble will perform a smorgasbord of beloved classics selected from Beauty and the Beast, The Little Mermaid, The Hunchback of Notre Dame, Tarzan, Mary Poppins and more. They'll be joined by a host of Broadway singers who'll pay the ultimate tribute to the music of Alan Menken, Phil Collins and Elton John amongst others.

Sound good to you? Share this page on social media and let your friends know about The Philly Pops - Disney's Broadway Hits at The Met Philadelphia.