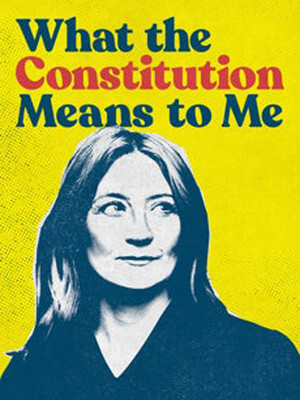 What The Constitution Means To Me

It presents the US constitution as profoundly flawed, but capable of improvement. The promise of a more just, more equal union has not been foreclosed. But a more perfect solo show? Broadway won't see one for years.

Why See What The Constitution Means To Me?

Dates and Venue to be announced

Official dates and venue for this production are still to be announced. We'll update this webpage as soon as we know what they are.

After being nominated for the Best Play award at the 2019 Tony's, Heidi Schreck's critically acclaimed drama hits the road on its first national tour! Wowing critics and audiences alike for its discussion on the USA's most important document, What The Constitution Means To Me was nominated for two Tony Awards, two Drama Desk awards and two Drama League Awards in 2019, marking it as one of the most scintillating productions of the year!

Weaving together political and personal histories to show how women's rights have shifted over the course of four generations What The Constitution Means To Me transferred to Broadway in the March of 2019, where it was named the play of the year by both the New Yorker and the New York Magazine. This brand new tour will feature a brand new set of cast members with Oliver Butler returning to direct.

WHAT IS CONSTITUTION ABOUT?

Having paid for college tuition through winning constitutional debates as a teenager, Obie-winner Heidi Schreck knows a thing or two about America's founding document. Here she brings her teenage self to the stage, alongside other women from her family tree, creating a lively and funny conversation about rights granted and rights withheld.

Please note that the images used are taken from the original Broadway production and may not reflect the current cast.

Schreck is deeply connected to this material and her delivery makes you feel as if she is telling this story to you for the very first time.

Seen What The Constitution Means To Me? Loved it? Hated it?

Sound good to you? Share this page on social media and let your friends know about What The Constitution Means To Me at Venue To Be Announced.