Sorry! You missed A Woman of No Importance at Walnut Street Theatre 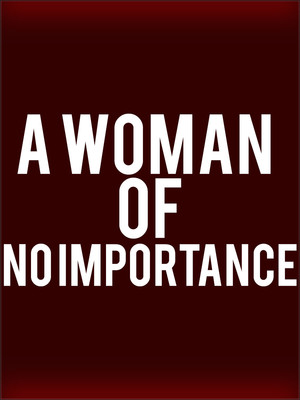 A Woman of No Importance

Cultures clash, long-held secrets are exposed, and A Woman of No Importance has the final word, as the master of biting wit satirizes the roles we play.

Why See A Woman of No Importance?

The Classic A Woman of No Importance Prepares Philadelphia Showcase

Oscar Wilde's A Woman of No Importance premiered over a century ago at London's Haymarket Theatre in 1893. Since then, the play has seen many stages across the world as well as undergoing film adaptations in Germany, France and Argentina. The play is an exciting addition to Walnut Street Theatre's 2020 season.

A Woman of No Importance uses humorous satire to mock the British upper classes during the Victorian era. When a desirable and wealthy American woman arrives in England interested in marrying a titled aristocrat, we witness a funny clash of cultures across the Atlantic.

Like all of his works, this play cleverly delves into the lives of the rich and the powerful, highlighting their sometimes hilarious social codes.

Josh: “We really enjoyed it”

My wife and I traveled in from out of town to see the play. We were both... more

Jonathan Bart: “Most of the People Here want a Musical”

I love drama and comedy plays much more than musicals. I generally make... more

Sound good to you? Share this page on social media and let your friends know about A Woman of No Importance at Walnut Street Theatre.