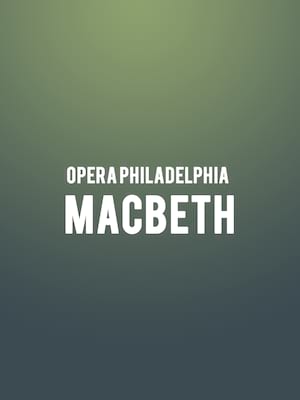 ...opera lovers would agree that Macbeth is a masterpiece both great and 'out of the ordinary', unprecedented in Verdi's art both for its psychological penetration and the refinement of its orchestral colouring

Opera Philadelphia's 2020/21 season programming is sure to delight opera-goers thanks to powerhouse performances by powerhouse A-list performers making company and role debuts, as well as a newly commissioned work, a major new adaptation of a great opera classic. Don't miss celebrated American Canadian soprano Sondra Radvanovsky as she wraps her dulcet tones around the role of Lady Macbeth for the first time during a hotly anticipated production of Verdi's Macbeth.

What is Macbeth About?

Spine chilling arias like Vieni t'affretta and Ah! la paterna mano punctuate a bloody tale of ambition and horror that unfolds on a barren moor in the Scottish Highlands. When General Macbeth returns from battle. he encounters a trio of prophetic witches. Initially dismissive of their claims, it isn't long til Macbeth and his wife find themselves at the center of a cut-throat conspiracy to seize power, at any cost.

Performed in Italian with English supertitles

Approximately 2 hours and 50 minutes with one intermission

Sound good to you? Share this page on social media and let your friends know about Opera Philadelphia - Macbeth at Academy of Music.