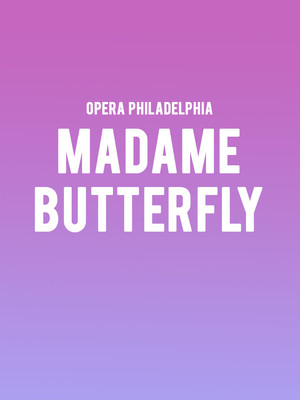 What would you sacrifice for love?

Tragic yet exquisitely transformative, Puccini's epic masterpiece returns to town for Opera Philadephia's 2019/20 season in this updated version courtesy of director Ted Hoffman. Moving the action to a more contemporary setting, the story of Cio-Cio San and her undying love for the errand Officer Pinkerton will is given a new twist as Hoffman examines the current political relationship between East and West

With one of the most shattering scores in the repertoire, Madame Butterfly is one of the most performed operas the world over and has spawned many adaptations in the 115 years since its premiere at La Scala. Telling the story of a young Japanese woman who marries an American Naval Officer shortly before he abandons her, it remains just as heart-wrenching as ever with every new adaption.

Sung in Italian with English supertitles

Two hours and 12 minutes with one intermission

Sound good to you? Share this page on social media and let your friends know about Opera Philadelphia - Madame Butterfly at Academy of Music.