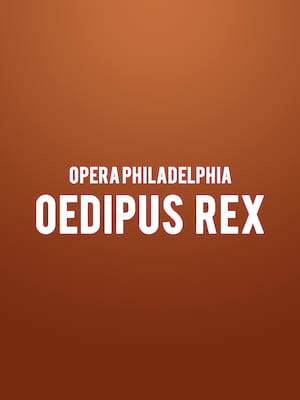 ...there is much to admire in the music, from Stravinsky's masterful scoring to his often beautiful lyricism and playful chipper moods.

What Is Oedipus Rex About?

An epic Greek Tragedy that first appeared in 429 BC, the work explores the nature of fate and the perils of hubris as Oedipus heads down an increasingly darker path in the hope of saving his people. Some of Stravinsky's most visceral works of his neoclassical period punctuate a whirlwind of bloodshed that begins with the king and queen of Thebes give birth to Oedipus and an oracle foretells that he will grow up to murder his father. To avoid this fate the king orders the child to have his feet broken and be left for dead, although fate has other plans...

Performed in Latin with English supertitles

Sound good to you? Share this page on social media and let your friends know about Opera Philadelphia - Oedipus Rex at Academy of Music.