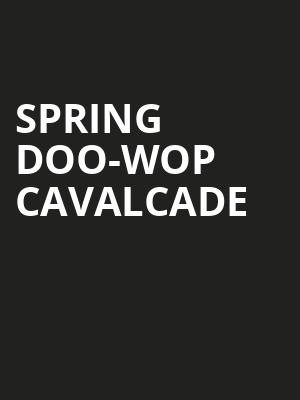 As the buds of spring unfurl and the world comes back to life after a long winter, celebrate with the smooth and soulful sounds of the Spring Doo-Wop Cavalcade, playing at the American Music Theatre for two special performances only. Taking the audience on a nostalgic trip down memory lane, Lou Christie, The Legendary Teenagers, The Chiffons, The Elegants and The Brooklyn Bridge join forces to perform the best of their legendary Doo-Wop and Blue Eyed Soul catalogues.

Possessed of one of the most distinctive falsetto vocals in pop music, Lugee Alfredo Giovanni Sacco AKA Lou Christie also broke ground as one of the first artists to compose and perform his own original material. Riding high in the mid 60s, he first broke into the top ten with the smash hit Two Faces Have I. After two years spent in the Army, lighting struck twice with chart-toppers Lightnin' Strikes and Rhapsody in the Rain.

Sound good to you? Share this page on social media and let your friends know about Spring Doo-Wop Cavalcade at American Music Theatre.