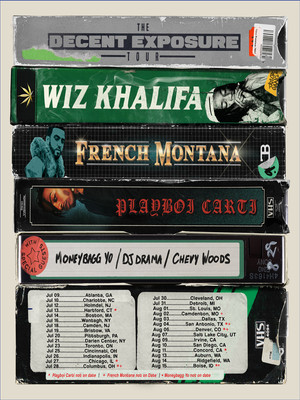 THE WIZ IS BACK!

Discovered when he was just 16-years old, US rapper and hip hop star Wiz Khalifa is a rags-to-riches tale and he isn't afraid to show it. The controversial musician sings about issues, from his love for his ex-wife to his love of green, well, have a listen to his album and you'll be able to work that out.

Citing Jimi Hendrix, Camp Lo, The Notorious B.I.G. and Bone Thugs-n-Harmony as musical influences, Khalifa has carved out a large niche for himself in this new generation of promising young rap artists. His 2012 single "Work Hard, Play Hard" went platinum.

2019 sees him travelling across North America on "The Decent Exposure Tour" which includes support from French Montana, 'Playboi carti, Moneybagg Yo, Checy Woods and DJ Drama.

Sound good to you? Share this page on social media and let your friends know about Wiz Khalifa at BB&T Pavilion.