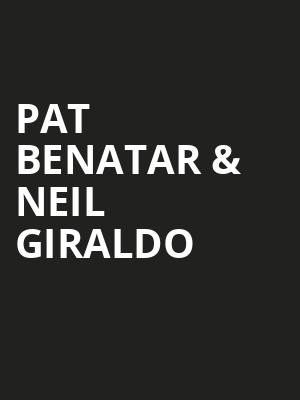 The duo behind Love is a Battlefield and Heartbreaker

Singer Pat Benatar and guitarist Neil Giraldo first met in a rehearsal room in 1979. Not only did the two hit it off romantically from the get-go, they discovered they were a perfect match musically as well. In the very same year they released In the Heat of the Night, which contained the duo's first classic track Heartbreaker. More hits were to follow in subsequent years, including Hit Me With Your Best Shot, You Better Run and Love is a Battlefield, a run which garnered Benatar four consecutive Grammy Awards between 1980 and 1983.

Married since 1982, the husband-and-wife-duo have the kind of on stage chemistry that could only result from one of rock and roll's greatest love stories. Wether backed by a full band or stripping things back for an intimate acoustic show, the pair command the hypnotised attention of their audiences, regaling them with tales of their vibrant career and life together in between soaring renditions of the songs that solidified their partnership.

Sound good to you? Share this page on social media and let your friends know about Pat Benatar & Neil Giraldo at Caesars Atlantic City.