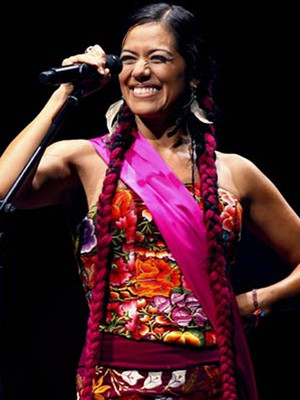 Always a colorful and unforgettable experience of Mexican culture and music

A performance by Lila Downs is always a colorful and unforgettable experience of Mexican culture and arts, as the singer-songwriter incorporates traditional music and dance from a variety of Mesoamerican cultures, as well as native languages and ancient traditions and folklore.

Born to artistic parents, her mother is a Mixtec singer and father a film-maker. Lila uses ancient and indigenous cultures as an inspiration in her music, and studied anthropology at thr University of Minnesota. Her lyrics often also have a social and political message, reflecting social issues which she feels strongly about such immigration and cultural heritage. Lila won a Latin Grammy Award in 2004 for her album Una Sangre, which translates as One Blood.

It was an amazing evening. Her incredible voice was surrounded by a fine... more

Sound good to you? Share this page on social media and let your friends know about Lila Downs at Merriam Theater.