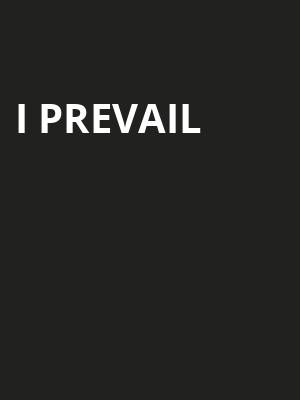 Keep an eye for these guys, their potential is massive and I cannot wait to see what the future holds for them.

Why See I Prevail?

American metalcore pioneers I Prevail burst our of their hometown of Southfield, Michigan in a surprising way... Formed in 2013, it was only a year later that they gained notoriety when their gritty cover of Taylor Swift's Blank Space went viral, paving the way for the release of their debut EP Heart vs. Mind in 2015. The rock powerhouse is hitting the road on their first North American headlining tour in support of its new album 'True Power'!

Fearlessly blending metal, post-hardcore and pop together in the vein of contemporaries Bring Me The Horizon and A Day To Remember, I Prevail explore new territory on their 2019 sophomore album Trauma, fusing trap, hip hop and electronica to their already explosive, distinctive sound. Inspired by the darkness and ultimate triumph of frontman Brian Burkheiser in the wake of a traumatic vocal injury that almost ended his career, the album signifies the blistering return of a band set for world domination.

Catch the hellraising quintet as they hit the road on the 2022 tour!

Seen I Prevail? Loved it? Hated it?

Sound good to you? Share this page on social media and let your friends know about I Prevail at The Fillmore.